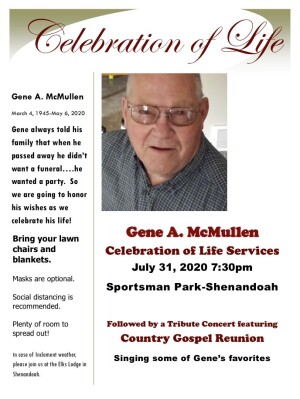 Gene A. McMullen, 75, of Shenandoah, entered into eternal rest unexpectedly Wednesday evening, May 6, 2020 at the Emergency Room at Shenandoah Medical Center at the age of 75 years, 2 months and 2 days.

Gene was born in Hamburg, Iowa on March 4, 1945 to Leslie Bryan and Mamie Lee (Shull) McMullen.  He spent his early years on the family farm north of Shenandoah with his parents and two older brothers, Rex and Jim.  After his father passed away, Gene and his mom moved into Shenandoah.  He attended the Shenandoah Community Schools graduating with the class of 1963.

On June 24, 1965, Gene was united in Marriage to Linda (Whitehill) at the Presbyterian Church in Shenandoah.  Gene and Linda were later blessed with the addition of two daughters, Diane and Sheri.  Gene lived in Shenandoah for the rest of his life.

During high school and early adulthood, Gene worked at the Page Theater and the Iowa Drive In where he met the love of his life, Linda.  How they met is a fun story you can ask Linda about sometime.  He was also a cook at Nishna Valley Café, a route driver for both Borden Dairy and Tyler Brothers Bottling and worked for Farnsworth Trenching before being hired at Eaton Corporation in November 1971.  He retired from Eaton after 30 years of service.  One of his favorite jobs was being a substitute school bus driver for Shenandoah for many years.  Several of the kids affectionately nicknamed him “Mean Gene”.

Gene was a member of Memorial Baptist Church where he helped start the bus ministry.  He loved each of the kids that rode that bus like they were his own and still heard from them from time to time to this day.  During this time, he was a member of the trio The PTL Singers.  They traveled around the area sharing their musical gifts with others, especially nursing homes and other churches.  He was currently a member of the Shenandoah Congregational United Church of Christ.  Everyone knew him as the best pancake flipper on Shrove Tuesday and that he could be found in the back pew on Sunday mornings greeting everyone as they came in with a smile.  He was a member of the Shenandoah Jaycees for many years and more recently served on the Shenandoah Tree Board.  For several years Gene could be found donning a red suit and white beard in the weeks leading up to Christmas to give the big guy some help with the children of Shenandoah.  One of Gene’s greatest contributions in his eyes was becoming an EMT and being a volunteer member of the Shenandoah Ambulance Service for many years.

Gene had several hobbies and special interests over the years.  He played the accordion, especially at Christmas time, to the delight of his family.  He enjoyed camping with family and friends when the girls were younger and researching family genealogy since retiring.  He enjoyed supporting the activities of his grandchildren and many other young people around Shenandoah and was often found in the stands at many Shenandoah activities.  Gene was a gifted mechanic and body man.  Most evenings and weekends he would be in his garage working on someone’s car.  He received many calls often in the middle of the night to go help someone stranded and needing help.  He never hesitated to jump in the pickup and go help.  Gene started helping shoot off the 4th of July fireworks while a member of Jaycees and continued doing this for over 40 years.  He was proud to be able to help provide this for the Shenandoah community.  A lot of hours went into the prep work and execution for the teams of volunteers he put together to make each show possible.

Gene never met a stranger and enjoyed nothing more than being able to give someone a reason to smile.  If you needed something, he would be the first one in line to lend a hand.  Social distancing was a struggle for him because he missed being able to visit with people and give them a hard time.  Although we will miss him greatly, he has left behind more memories than can be measured.

To send flowers to the family or plant a tree in memory of Gene A. McMullen, please visit our floral store.