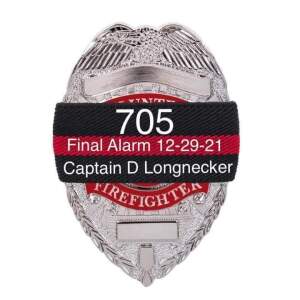 Dale Eugene Longnecker, 49, of Essex, Iowa, unexpectedly entered into eternal rest on Wednesday, December 29, 2021 at the Shenandoah Medical Center.  A celebration of life funeral service for Dale will be held on Monday, January 3, 2022, at 1:00 pm at Nishna Valley Funeral and Cremation Service in Shenandoah with Pastor Seth Kaiser officiating.  The family will greet relatives and friends with visitation and viewing on Sunday, January 2, 2022 from 4:00 to 6:00 pm at the funeral home.  Memorials in Dale's name are being directed to the Essex Firefighters Association.  Following the services Monday there will be a time of fellowship and refreshments at the Essex Fire Department.   Cremation will take place following the services.

Dale Eugene Longnecker, son of Marvin Eugene and Mary Jean (Hudson) Longnecker, was born on October 1, 1972, in Denison, Iowa.  He unexpectedly entered into eternal rest on Wednesday, December 29, 2021, at the Shenandoah Medical Center in Shenandoah, Iowa, at the age of 49 years, 2 months, 28 days.

As a youngster, Dale was of average height and maybe even considered small in stature, but quickly morphed into the gentle giant he became known as, standing 6’ 8”.  He was affectionately called “Big D” or “Bubba” by his friends.  Growing up, the family lived on several different farmsteads in the Dow City and Denison, Iowa, areas.  During this time, Dale enjoyed being outdoors and especially spending time in his go-cart.  He also enjoyed the times of playing Atari from his youth.  He attended Dunlap High School.

Through the years, Dale worked as a truck driver, he enjoyed being on the road.  The highlights of his career were when he managed the bars in Coin, New Market and Bedford.  Dale enjoyed being around people and cooking that was all part of his DNA.   He last worked for The Ice Guys in Clarinda working as a truck driver hauling ice and Fosters Frozen Water.

As mentioned, helping people and cooking were deeply ingrained within Dale.  He loved smoking meat and was renowned for his smokers (he had a 1,000-gallon tank smoker) and smoking ability.  There wasn’t anything he couldn’t smoke and make it taste amazing.  He loved to hold benefits and cook for anyone in need.   It didn’t matter who they were, if they needed help, he was there to assist.

Dale dedicated his life to being a volunteer firefighter.   He served in every community he made home.   He was currently a Captain in the Essex Fire Department and had served on the Coin, New Market, Thurman and Gravity Fire Departments.  If anyone was in need of help, Dale literally was the first on scene.  There are many Dale speeding tales in response to showing up at an emergency or loved one in need, affectionately referred to as “Dale coming in for another landing” upon arrival on scene.

Another thing Dale loved was riding motorcycles.  He was a true and thorough Harley Davidson man, going as far as naming his girls after them.  He also enjoyed driving the big rigs and seeing the country.  He loved Chevy’s, being a true American.  He liked to attend any and all kinds of auctions and especially liked to bid on the “mystery boxes” hoping for the next great find.  In his younger years, he enjoyed participating in demolition derbies.  He will be remembered for being very protective of his family and going out of the way to help.  “Heaven will have the best food now that Dale is there”.

Preceding Dale in death were his parents and grandparents and niece Mari Charon.  Left to cherish his memory are his ten children, Kolby Mather of Seiling, OK, Kollena Longnecker of Hitchcock, OK, Saraya and Nykote Smith of Ardmore, OK, Sara of OK, Rachel Silvey of Tacoma, OK, Donnavon Longnecker of Bellevue, NE, Dalton Kipper of Nebraska City, NE, Carly Cline of Stanton, IA, Harley Longnecker and Heritage Longnecker, both of Red Oak, IA;  sister, Charlene Townsend and husband Tobby of Thurman, IA; girlfriend, Angela Johnson and her boys Stephen and Jesse of Coin, IA;  four grandchildren, plus one on the way; numerous nieces and nephews; other relatives; and many, many friends.

To send flowers to the family or plant a tree in memory of Dale E. Longnecker, please visit our floral store.