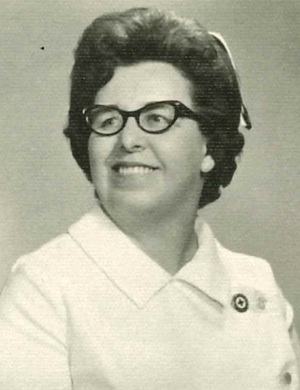 A memorial celebration of Ruth's life will be held on Saturday, November 23, 2019 at 11:00 AM at the Nishna Valley Funeral and Cremation Service in Shenandoah with Phil Wing officiating.  The family will greet relatives and friends with visitation from 9:30 to 11:00 am prior to the service at the funeral home Saturday morning.  Inurnment will take place at a later date in Baker Cemetery, rural Shenandoah.  Memorials in Ruth's name are being directed to the Ruth A. King Memorial Nursing Scholarship Fund.

Ruth Anna (Mullinix) King, daughter of John Day and Mary Grace (Musgrove) Mullinix, was born on November 4, 1922 in Glenelg, Maryland.  She entered into eternal peace on Tuesday, November 19, 2019 at Elm Heights Care Center in Shenandoah, Iowa at the age of 97 years, and 15 days.

Born in the family home in Glenelg. Maryland, Ruth quietly came into this world as the doctor, who was in the house, slept through her arrival.  She was raised on the family farm and learned many things about farm life from her family.  She attended school in a one room schoolhouse to which she walked one-half mile to attend.  For high school, she rode the bus to Clarksville, Maryland and graduated at the age of 16.  Following graduation, she worked on the family farm, took care of her elderly aunts, and babysat for a relative’s children.  Ruth walked to this job and wore out her shoes.  Her mother made her quit this job because the shoes were more expensive than the pay she was receiving.

At age 18, Ruth moved to Washington DC, where she did her nurses training at Sibley Hospital and earned her Registered Nurse degree.  She continued working in DC until her sister was transferred to Omaha, Nebraska.  Ruth and Lois moved across the country to begin this new adventure.  St. Joseph Hospital hired her to work in surgery.

One Thanksgiving, Ruth met Merle King when she came with Lois to the King farm.  Lois knew Merle’s brother, John, from working at the Air Base near DC. On April 7, 1951, at Providence Church in Glenelg, Maryland, Ruth and Merle were united in marriage.  They moved into the King family farm east of Shenandoah, Iowa, where she spent the next 50 plus years.  Through the years she worked at Hand Community Hospital, Municipal Hospital in Clarinda, Iowa.  She then studied at the University of Iowa so she could teach practical nursing at the Clarinda Community College, which became Iowa Western Community College (IWCC).

Ruth always had a big garden, did lots of canning, raised chickens and had time to help with homework even when she was grading papers or making lesson plans.  She was a lifelong       member of the Norwich United Methodist Church where she taught Sunday School, sang in the choir and was active in the WSCS (UMW).  She was also a member of the Altrusa Club, Antique Study Club and the Norwich Social Hour.

Merle always went to auctions and would bring home many “valuables”.  When Ruth retired she decided “if you can’t beat’em, join’em”.  They enjoyed their antique business for many years.  “King’s” was the place to go on Memorial Day weekend and the 4th of July.

Visitation
Saturday
November 23, 2019
9:30 AM to 11:00 AM
Nishna Valley Funeral and Cremation Funeral Service